AT THE HEART OF GIVING

Thanks for stopping by! We're glad you're interested in learning more about St. Vincent de Paul Society of Milwaukee. Below, find information on our mission, history, board and staff, and more! 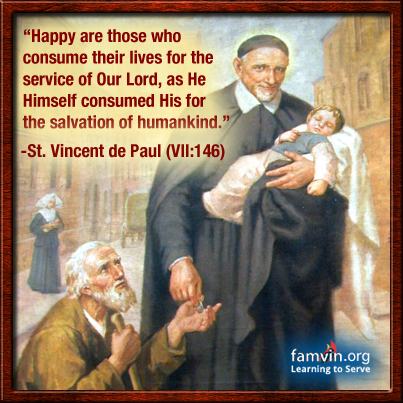 The Society of St. Vincent de Paul is an international Catholic organization of lay persons which seeks, in a spirit of justice and charity, and by person- to-person involvement of its members, to eliminate poverty and hunger.

Vincentian helping can include any person-to-person assistance that promotes human dignity and integrity. The Society is concerned not only with relieving need but also with addressing the situations that cause it.

In 1833, the St. Vincent de Paul Society was founded in Paris. Frederic Ozanam, a 20 year old university student, is considered the principal founder of the Society because of his leadership within a small group of similarly-minded students. Their model of visiting the poor of the Paris slums was adopted widely, reaching Milwaukee in 1849. St. Vincent de Paul "conferences," as the volunteer groupings are called, were established in several Milwaukee Catholic parishes.

In 1914, enough conferences existed to form a "council." This allowed for legal incorporation and the ability to take on broader activities. Over the years, activities have taken the form of thrift stores, meal programs, shelters, and helping centers. These programs have been generously supported not only by the Catholic community, but also by other faiths and the broader community. Most programs, although professionally staffed, maintain a largely volunteer component.

Local History
The Society has conferences at 45 locations in Milwaukee County, most being at Catholic parishes. There are also volunteers of many faiths who prepare and serve food at our meal programs. Some also offer their time and talent as volunteers at SVDP thrift stores.

Our Board of Directors

SVDP receives a donation for your purchases on amazonsmile.com